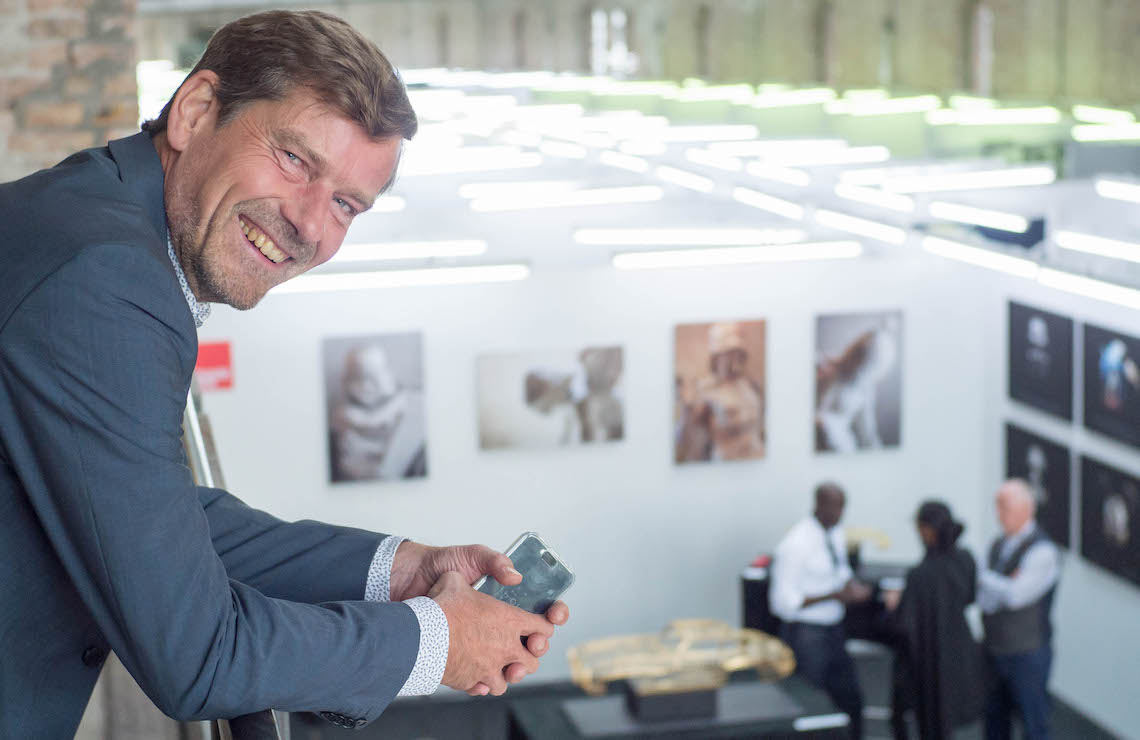 Art fair director Jörgen Golz reveals in an interview why Frankfurt has been picked as next location for the Discovery Art Fair, what he personally values most about the city, and what exhibitors and visitors can expect at the first edition of the new art fair.

From the November 1st to the 4th, the Discovery Art Fair Frankfurt is celebrating its premiere in the banking metropolis. What can exhibitors and visitors look forward to?

To a lively fair with great variety. In a space of over 2,000 square meters, around 80 international exhibitors will present a multi-faceted offering of highly current artwork without speculation fees. Where else will you find so many artistic items collected in one place? The relaxed and communicative atmosphere invites to discover the diversity of art. We can guarantee that both buyers with thin wallets, but even those with fatter ones, will get their money’s worth. We offer a large selection of (still) affordable new art; but even for the more cautious buyer, already established works at reasonable prices can be found at the fair. We invite all art lovers to come to Frankfurt to make their own impression of the large variety: next to photography, sculpture, digital art, and painting, you will also find urban art and genre-spanning pieces.

Why have you chosen Frankfurt am Main as the third location for your Discovery Art Fairs?

Frankfurt needs an art fair! The extent to which the people are interested in art has been proven by a Dimap study funded by the Kulturfond Frankfurt RheinMain, according to which 63% of residents of Frankfurt visit art exhibitions. So here we’re encountering an interesting environment for an art fair.

And: the city of Frankfurt has a fascinating potential for selling art. 5.5 million people live in the metropolitan region of Frankfurt/Rhine-Main. In a 200-kilometer radius around Frankfurt are an astounding 44 million residents! Even if we only manage to inspire a per mille percentage to come to the fair, we can look forward to 22,000 visitors. The region is teeming with economic strength and spending power. In Frankfurt, the positive effects of the Brexit are already perceptible in the city.

Generally, there is an implied correlation between the level of education and affinity for art. Frankfurt is home to a large number of excellent universities with a very high standard of education and research. More than every sixth (18.1 percent) resident in the city has an academic degree. Frankfurt takes 2nd place in the number of academics in a Germany-wide comparison of cities.

Another plus is the city’s internationality in a world that, despite the hegemonical aspirations of a few exceptional states, continues to grow together. The Frankfurt Airport is an international hub. And the goals of our fair also include a worldwide network and exchange.

And if we take a look at the geographical map: We organize a fair in Berlin, one in Cologne, and, with the DAF Frankfurt, we are now covering the southern part of the country.

How does the art-market location of Frankfurt differ from the other staging sites of your art fairs, Cologne and Berlin?

The biggest difference I see is between Frankfurt and Berlin. Berlin is supposedly the world’s largest production site of art. As a commercial center for art, Berlin doesn’t have this exposed position. The artistic interest in Berlin is high, as is the possibility for international networking, but the spending power is rather modest in comparison to Frankfurt or even Cologne. Because of its history, Berlin is a spider without a web, but in contrast to Cologne and Frankfurt, the collecting tradition there still needs to be developed.

Cologne is an established and successful turnover site for art, whereas Frankfurt still has some catching up to do in this regard. Perhaps with our fair, we can make a contribution toward developing Frankfurt into a significant commercial center for contemporary art that will be recognized internationally. 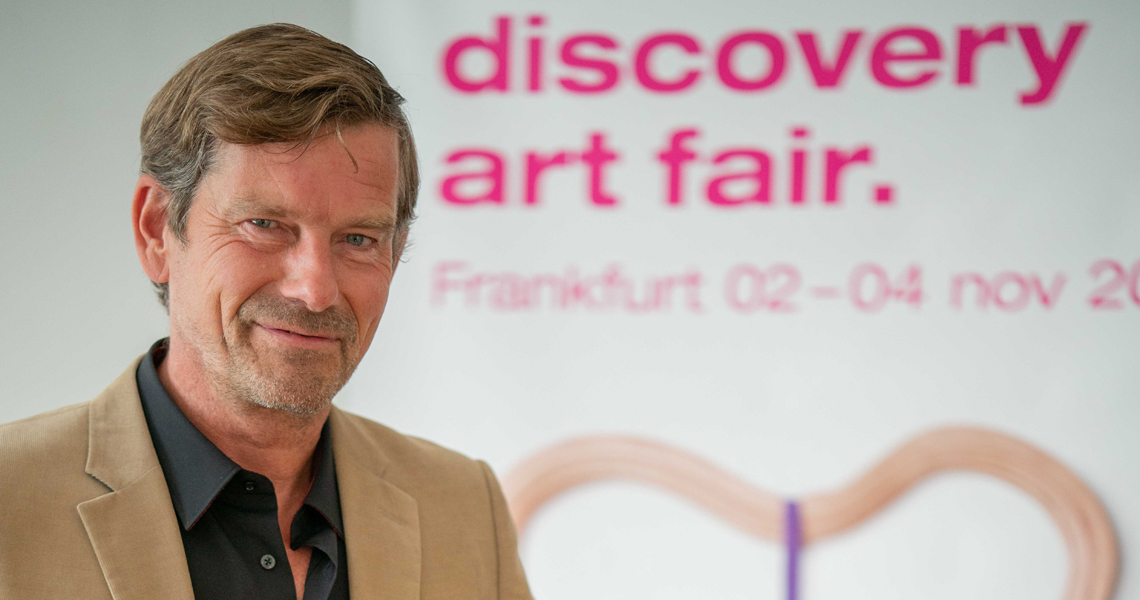 We know from previous interviews how important choosing the right fair location is for the success of such events. Why did you decide to go with the Messe Frankfurt?

Space is a scarce commodity in Frankfurt. In order for a fair to evolve, it needs space, lots of space. And a fair requires long-term planning security. We’re arranged differently than free projects like, for example, the Ost-Stern, which is currently located at the former Mercedes Benz branch on the Hanauer Landstrasse. We also need a central location with good transport connections. So the Frankfurt exhibition grounds was the only site that could meet all the required criteria. The Messe Frankfurt is an internationally-ranked exhibition site and, as such, the right framework for an internationally-oriented art fair. We’re especially delighted that the fair will take place in the “Forum”; in my opinion, the nicest hall of the entire exhibition center.

You’ve been spending a lot of time in Frankfurt in advance of the fair. What do you personally like most about the city?

Next to all the beautiful skyscrapers, museums, the “Äppelwoi” cider, the old town, the cathedral… there are two things I like a lot: a special Frankfurt form of calmness (except when driving) and both the paths along the banks of the Main river! There you have a view of the water, geese, and lawns; on one side you can see the historic buildings, on the other side the megacity, and in the middle, the bubbling of the cargo ships – stunning.

What is your impression of the local arts and culture scene?

The scene is in some sense familial, but it is nonetheless blessed with great diversity. There are the large museums – it is due in particular to its unique museum landscape that Frankfurt maintains a large reputation as art and culture metropolis. The around 60 exhibition sites count 2.4 million visitors annually. Institutions like the Städel Museum, the Schirn Kunsthalle, or the Museum of Modern Art (MMK) are world-renowned. The Städelschule trains artists that go on to enjoy international recognition.

The arts scene is also diverse and lively – due in part to the fact that Frankfurt does a great deal for its artists. A current example: It is thanks to the engagement of the city of Frankfurt that the Atelierfrankfurt has planning security for the next ten years. The exodus of artists to Berlin has reversed. Many have returned to Frankfurt. Also, the gallery scene offers great variety: From the Fahrgasse to the district around the main train station, and right up to projects like the Kunstverein Familie Montez, in Frankfurt, you can find very different art for very different budgets and tastes. Beside the Schirn, it would be nice if Frankfurt were to create an art space for the off-scene with a somewhat more experimental character. That would enrich the entire art scene in Frankfurt and certainly draw international attention.

Is it not difficult in Frankfurt, where so much revolves around banking and finance, to interest people in contemporary art?

No, money and art go great together. We are making an exciting offer with the DAF Frankfurt. An artistic variety under one roof that you can’t experience anywhere else in such a concentrated form and in such a short time.

And our artworks are highly speculative, which should tempt many bankers. Many visitors with a good nose for art have made great bargains at our fairs because they bought from artists in their early stage who have advanced nicely in value. But I can give only one piece of advice: buy with your eyes, not your wallet! The joy, the pleasure that a new favorite work of art can provide daily is enough of a return rate. Besides, people are curious by nature, and at our fair people can satisfy their curiosity about artistic content.

We in no way underestimate the effort needed to establish a new fair, but with the support of the city of Frankfurt and the state of Hesse, we’re sure that we’ll have to intermittently close the opening event due to overcrowding, as was the case at our last Berlin fair.

From 1989 to 2007, Frankfurt was the setting for the renowned art fair Art Frankfurt. To what extent are you connected to this longstanding art fair tradition and to what extent does your concept differ from this classic art fair?

The former Art Frankfurt and the DAF Frankfurt have identical objectives: the sale of contemporary art. We, too, are organizing the fair at the fair grounds and the number of exhibitors is similarly comparable. We’re also offering white cube architecture for the presentation of artwork.

But since 2005, a lot has happened in the art world. There was the collapse after 2007, and new media and new movements play an important role in the art market. In particular, the self-awareness of artists has changed. The DAF Frankfurt takes this into account and admits artists on equal footing alongside galleries and project spaces. Our approach is with certainty more democratic.

We would also like to make our contribution to ensure that the visual arts continue to gain greater significance in society. Besides the classic art lovers, we are trying to interest new target groups for contemporary art. This we do with a directed appeal to target groups with a disposable income that enables them to invest in art; and may this budget still be so small. Important for the fair is the removal of barriers to entry, as well as a diverse offering and a communicative, open atmosphere.

On June 19th, the Discovery Art Fair team will be introducing themselves and the concept of the fair for the first time at a public event in Frankfurt. Can you say anything more about this?

My team and I will be presenting the DAF Frankfurt in detail at the Kunstverein Familie Monetz. I’m pleased that I’ll be supported by our curators Dr. Peter Funken and Stefan Maria Rother during that evening. We will of course be available for questions, suggestions, and tips. We’d be very happy if the evening is host to a lively discussion. The event is geared towards the press, to agents of the art market – whether they be gallerists, artists, curators, or members of institutional cultural entities – but also the interested public is very welcome. It doesn’t matter if you’re a seasoned gallerist, member of a project space, or an individual artist looking to take charge of your own marketing: we will try to answer all of your questions.

You are cordially invited to our “Meet the Team” on Tuesday, June 19th at 7pm in the Kunstverein Familie Montez, Honsellstrasse 7, 60314 Frankfurt am Main.