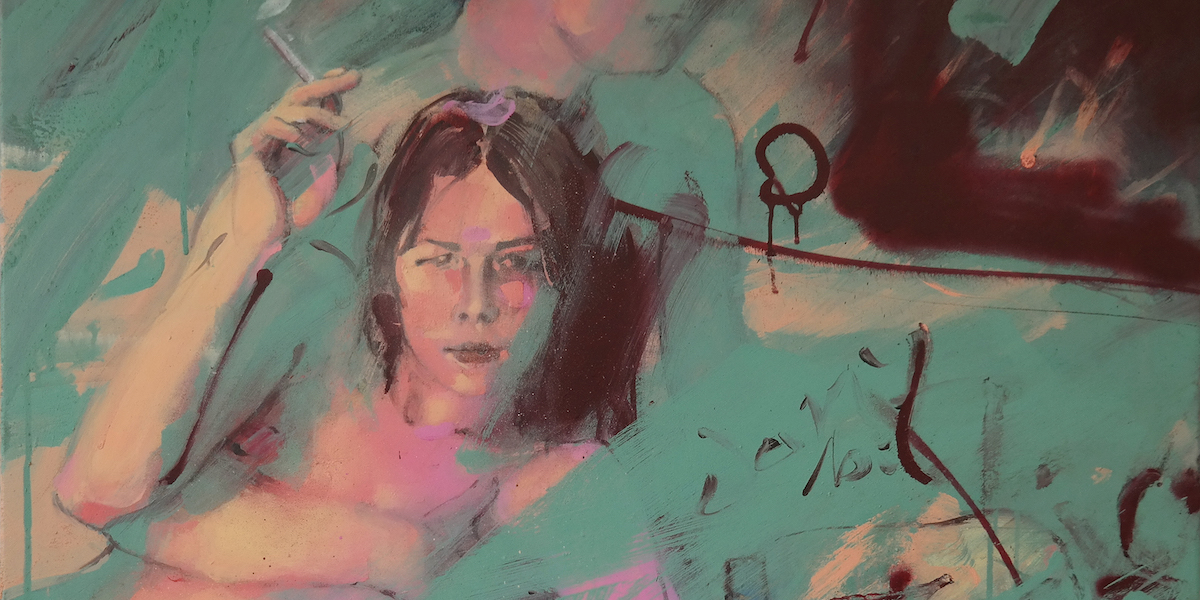 Under abstract layers of color and freehand descriptions, RABE’s paintings hide one of the most classical elements of all – a fascination with the human body. Peeling away the visual strata, the observer dives deep into the matter of painting, space where the essence of the artistic idea is married to the visual language.

Breaking away from his academic studies, RABE started pursuing this visual expression in 1989 when he embarked on a long studious trip to Italy. Fascinated by the early Renaissance painting, he studied classical composition, perspective, chiaroscuro and color from masters such as Titian. During this process, he started to incorporate contemporary, urban imagery into his classically designed works, and later switched to acrylic from oil as his preferred technique. RABE felt the connection with Italian art strongly as it took both him and his family back from Munich to Rome, where he set up a studio in 2006.

True to classical realism in his early works, RABE experienced a profound artistic change around 2010. He abandoned realism and almost sculptural representation and gave way to the more spontaneous creative process. He allowed abstraction, street art and a little bit of chaos to enter his Renaissance-based composition, as he started to employ new techniques such as spray can. Thus, RABE achieved ultimate freedom of expression by having started painting in an academic manner, proving that personal artistic vision and deconstruction of classical rules lead to a recognizable, energetic style.

The new way of work led RABE to start a series of paintings in 2014 inspired by Berlin, his new place of residence. Moved by the inner energy, his impulsive painting flow resulted in works that reflect the energy and atmosphere of the city through color, shape and form. Focused on female bodies, often nudes, RABE captures the “pure female energy” and connects it to the contemporary urban setting. His latest paintings are powerful portrayals of archetypal women, they celebrate the classical beauty of their bodies presented in an unequivocally contemporary manner.

Energy and Experience in a Painting

In constant search for the essence of painting, RABE turned from studying the form to experiential creating. Releasing his inner energy from the world of pictorial ideas, he creates vibrant, energetically charged works in a natural painterly flow. His automatic process allows him to delve deeper into the meaning of the painting process and to embed it into the work, but his long classical training still shines through the glimpses of harmoniously shaped female bodies. This cathartic process marks his quest for inner beauty, its materialization and the ultimate, ecstatic representation of the human condition.

During the upcoming Discovery Art Fair in Cologne from 23 -26 April 2020, RABE will present a selection of his works from the series “Berlin” and “Bilder über Frauen”.