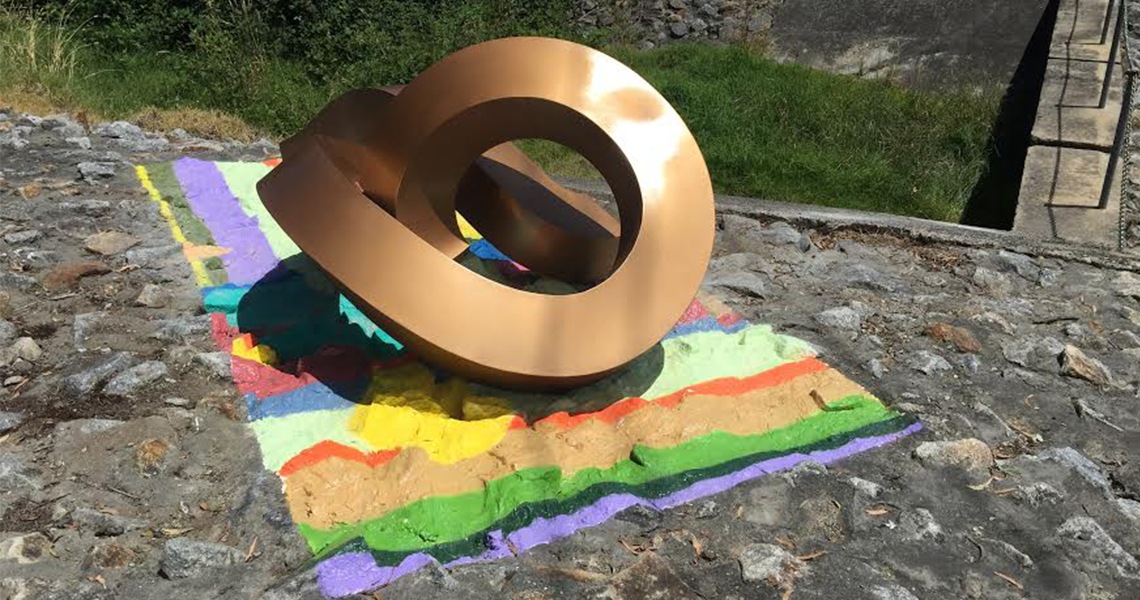 Martin George, an Australian sculptor, is a dedicated artist with an ironic sense of humor. He creates large-scale pieces of modernist sculpture, viewable from all directions. While some of his sculptures are characterized by twisted forms and knots, others unexpectedly project from the wall. The artist likes to combine seemingly incompatible objects in order to make his audience smile and laugh – for example, in one of his artworks he has placed an over-sized industrial weight of 20 kilos on an elegant marble table. In our interview with this witty Australian artists, we talked about his previous trips to Europe as well as his plans for 2016 Berliner Liste art fair.

Dear Martin, you’re originally from Australia, but you decided to take a long trip in order to participate in our 2016 Berliner Liste. When did you hear about our art fair for the first time and how did you decide to come here?

Martin George: Yes, it is a very long way, about 16,000 km! But then again, Australia is on the other side of the world, so Aussies get used to traveling… Last year I was in Germany for my friend’s wedding in Hawangen Bavaria, unfortunately I didn’t have the time to immerse myself in Berlin’s art culture as I was only there for 3 days, so I promised myself to come again during art week. I found out about Berliner Liste from an art dealer in Melbourne, he mentioned that the way the art industry engaged was rapidly changing, and that Berlin had a contemporary perspective, so naturally I wanted to be a part of it.

Have you ever participated in other European art shows or perhaps visited some major cities of the Old World? What were your impressions?

MG: I’ve visited Europe many times as I have family in Germany, Croatia and Austria but this will be my first show in Europe. I’ve visited galleries and museums all over Europe and obviously there are astonishing collections across the Continent. More impressive to me than the artworks themselves was the way they are embraced by the broader community throughout much of the ‘Old World’. I felt that the general public had a stronger sense of connection with visual arts, whether it be the large iconic galleries or the most obscure, alternative art spaces. There is an engagement, and a sense of the ownership of the arts present in the broader community.

We would like to know a little bit more about your art. Where do you find inspiration for your large-scale sculptures in stone and metal?

MG: Large-scale sculptures come naturally to me, I’m a qualified mechanical engineer, so in the past I’ve built bridges and parts for power stations, so I’m used to large-scale. If anything, I’m steadily making bigger structures. I like the way that scale affects the viewer, how it allows for multiple stories within one work. Viewed from a distance a large scale piece is part of the environment in which it stands, its interaction provides an artistic context. The same sculpture standing on a cliff overlooking the sea or surrounded by an outer suburban expanse of factories provides a context that is only possible to grasp as part of this wider view. Closer still the monumental scale of the work begins to have a visceral effect on the viewer simply through the physical dimension of the work that is now dominating their space. Finally right up close the work dissolves into line and texture, the sheen of steel or the crystal veins on marble. At this magnification the materials and the hand of the artist become evident, and broader context slips away. 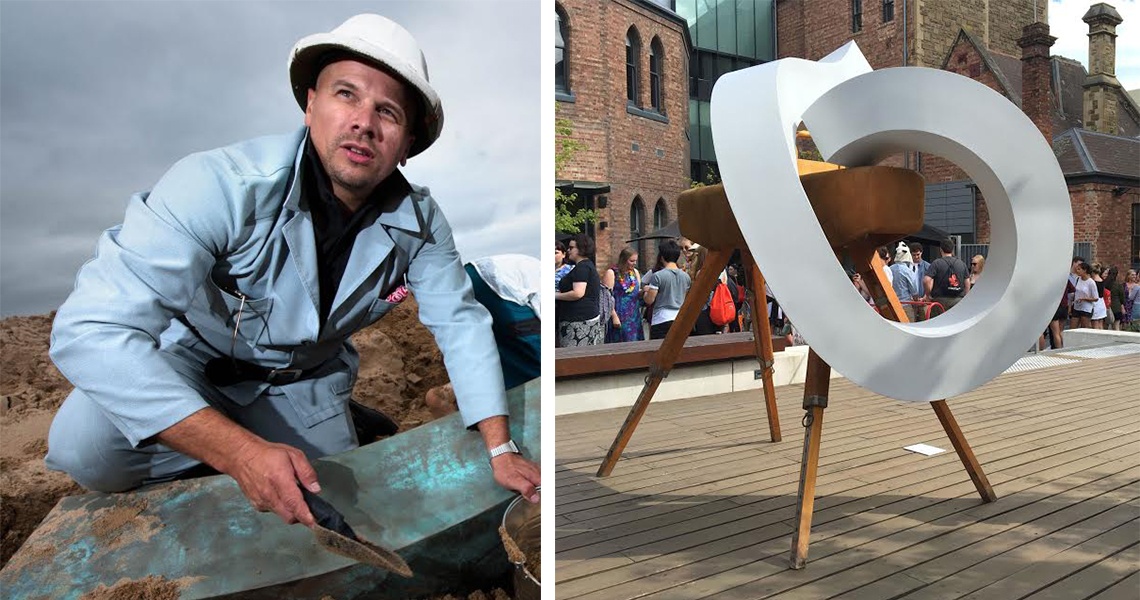 Your sculptural projects are meant to intervene with the built environment. What is the underlying artistic process behind these interventions? How do you choose where to place your artworks?

MG: I was born and raised in Melbourne, and it seems like everybody is involved in street art in some capacity. Many of my friends visit Melbourne just to be involved in the scene and leave some work. My form of interventions is based around sculptural collaborations with “site” and “place”. One of my favorite interventions is an abstract woman sunbathing in a storm water drain in Knox (Eastern Suburb of Melbourne). The location provides layers of context that I can’t get inside the white walls of a gallery. With this piece, I collaborated with a street artist called ZEITS, he spray painted the beach towel and I sculpted the form. Urban intervention is the unadulterated version of my art, the feral version. I value work that I create for the gallery as it allows me the opportunity to make sculpture whose meaning is entirely contained within itself. Urban intervention is exciting as the physical sculpture adds to an existing story.

What are your plans and expectations when it comes to our 2016 Berliner Liste? Are you interested in finding European galleries to collaborate with?

MG: I don’t know what to expect, I just want all of my sculptures to arrive safely. This very morning I received an email from my shipping agent that my container was being inspected by customs control in Hamburg, I just hope that the inspectors like large form abstractions in steel… On a serious note, my work is well known in the sculpture scene in Australia, and coming to Berlin and having my work engaged and critiqued will help push my practice. Berlin has plenty of art muscle, and it would be wonderful to find a gallerist who sees potential in my craft. I certainly see this visit as the beginning of an ongoing relationship with the Berlin arts scene.
Besides, I like Germans, I married a German!

How would you describe contemporary art scene in Australia these days? Is there any specific genre of art that is most popular among aspiring young artists?

MG: The contemporary art scene in Australia is so diverse it’s not really defined by any specific genre. In my area of practice, there are some amazing sculptors working in Australia right now. Artists like Patricia Piccinini and Callum Morton are creating amazing work.Rather than being defined by genre, I think many emerging artists share an ethos of ironic investigation. Whether hopeful or sardonic I feel like a lot of Australia interacts with the world through a lens of irony. Australia holds itself as an egalitarian society, at its best this is a commitment to equality and shared wellbeing, at its worst it’s a distrust for excellence and the rejection of striving for personal achievement. As such, the artist can treat their work with reverence but cannot revel in their identity as ‘an artist’. I think the response is often an ironic detachment between themselves and their art.