Since the beginning, Discovery Art Fair has been focused on affordable art, deliberately targeting the market populated with young collectors and art-loving people who occasionally make a purchase. As a special feature, the fair established a program that allows artists to expose their works at the fair without an intermediary, coming into direct contact with the audience. This way, the artists are enabled to enter the art market more easily and capture the attention of future collector or potential gallery representatives.

The 2022 Cologne edition of the fair continued this tradition, accepting more artist applications than ever before and allowing them to set up their booths in the main and adjacent hall as well as in the Loft space situated in the 19th century post office vaults.

Browsing the fair for attractive pieces and interestingly set up booths, several individual artist presentations really stood out. Hereby we present a short selection of the artist booths that deserve special attention, either for their booth design, project significance or the outstanding art.

Paper-based, covered in washes of diluted black ink, works by Sandra van der Meulen evoke the ancient tradition of Chinese tea painting, while retaining a western feature in the text visible through the washes. Often enhanced by collaged elements such as rope or additional paper, her pieces possess a tactile materiality and an object-like appearance. Immaculately done and decorative, these works represent artist’s meditations on life and her personal cultural heritage. Sandra van der Meulen and her works can be found at the booth B8. 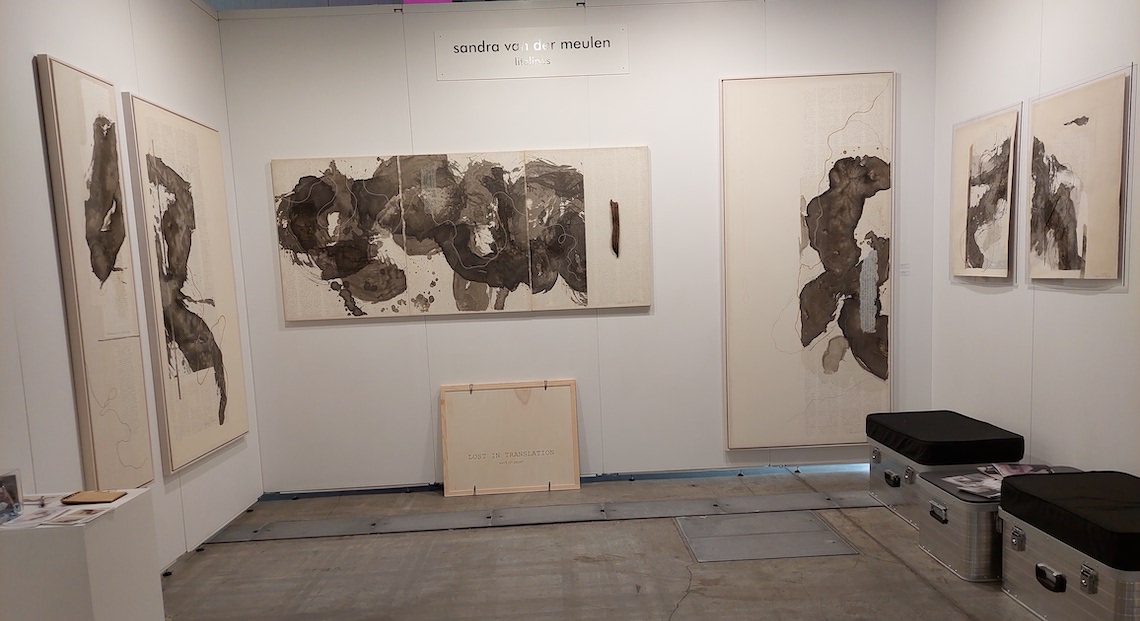 A story collector, Juan Andrés Milanés Benito featured a well-curated small booth populated with objects and prints from his ongoing series “Rehearsal of the present”. Looking to collect 365 stories from people affected with different emotionally impactful events, the artist is creating an archive of human experience, rendered visible through objects. Each story is burned into an epoxy object as a vinyl record would be, and each object is playable on a specially made record spinner/player. This long-term project is not solely an aesthetic jaunt, but a socially conscious, participatory event, looking to present a larger record for us to learn and reflect upon. Interested people are invited to share their story, or if not collecting an object, to support the project by purchasing an affordable print. 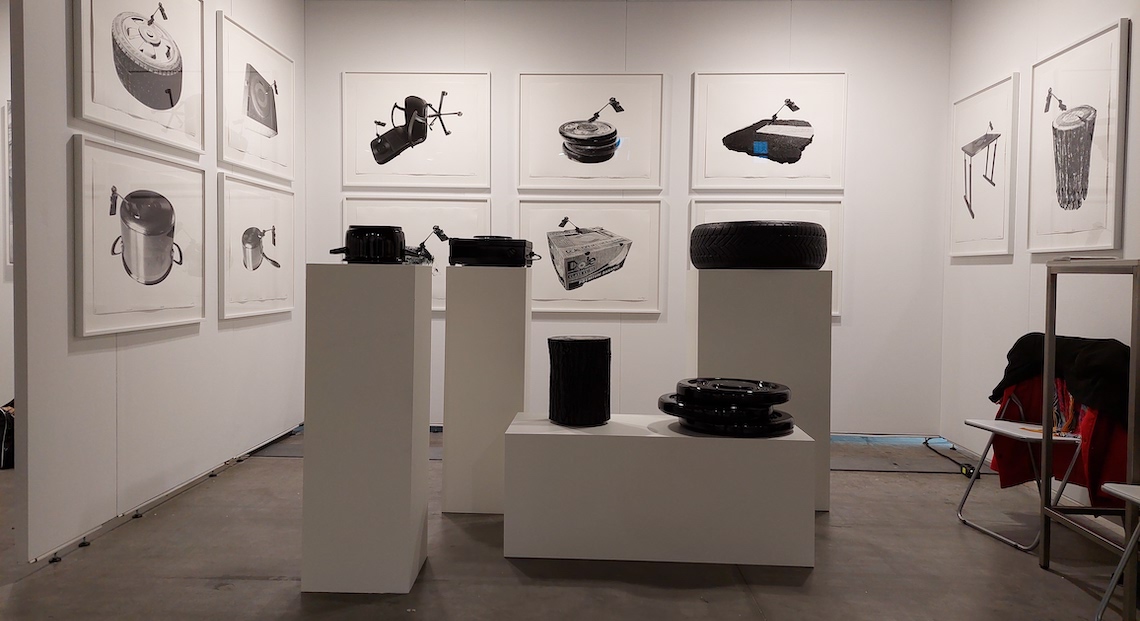 Moving down the B lane on the left hand side of the main hall, a visitor is soon faced with an eerie painting of a hound sitting in shallow waters. This ghostlike image belongs to the booth of Jill Tegan Doherty, a versatile English artist residing in Berlin. Doherty is the master of canvas, effortlessly ruling form and color to create odd, and often disturbing creatures that lurk from her works. Sitting in a place between oneiric and nightmarish, her characters take us to the unspoken realms of subconscious. It’s impossible not to try to relate. Simultaneously, we find her minute drawings and brilliant etchings that confirm her talent and versatility. 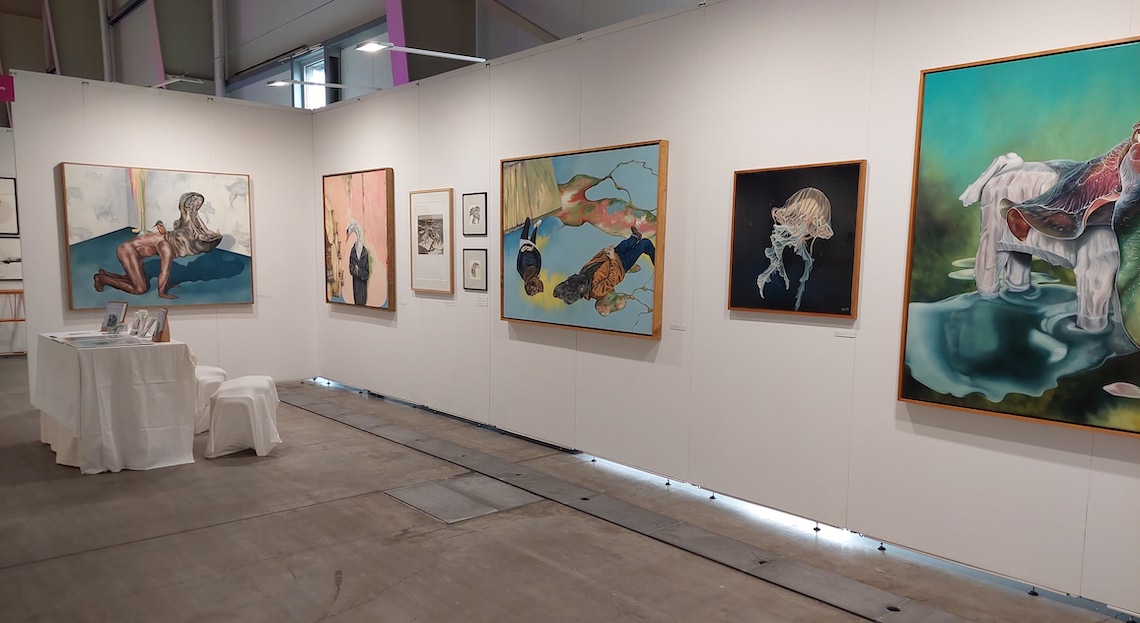 Searching to develop her visual language towards abstraction Silvia Szlapka began to use mosaic-like patches of color and figure to create a dynamic, tense relationship with the background. Her charming works feature contemporary genre scenes, from the street or galleries, centered around humans. Arranged along three sides of a very small booth at the adjacent A hall of the fair, Silvia Szlapka’s exhibit is excellently designed, joining the highlights of the independent artists’ presentations. 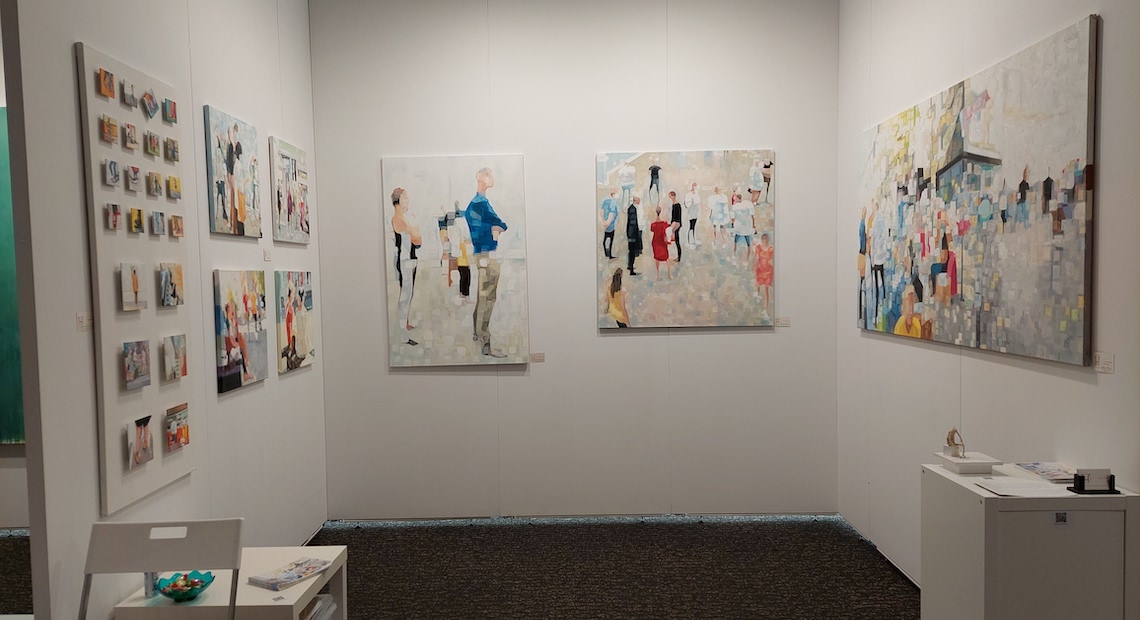 The work of German artist Gerd Paulicke examines the matters of the human condition by looking at his self-image, its physicality and meaning. Tackling themes of transience, wisdom, knowledge, identity and personal experience, he embarks on an artistic odyssey through the world of sculpture and installation. He is a master painter and a skillful sculptur, whose work can be found at the very beginning of the artist-dedicated B lane of the main exhibition hall. Searching for the beauty in found pieces of paper, collages of Dany Klotz are inspired by the material iself. She approaches image building from inside the picture and without a particular plan, focusing on relative details, light and the growth of the composition. The result is a relational image of an imagined reality, something familiar, universal, yet non-existent. A world bursting with color, texture and life. Dany Klotz’s collages are a definite highlight of the fair, deserving a special spot in the artist-featured segment. 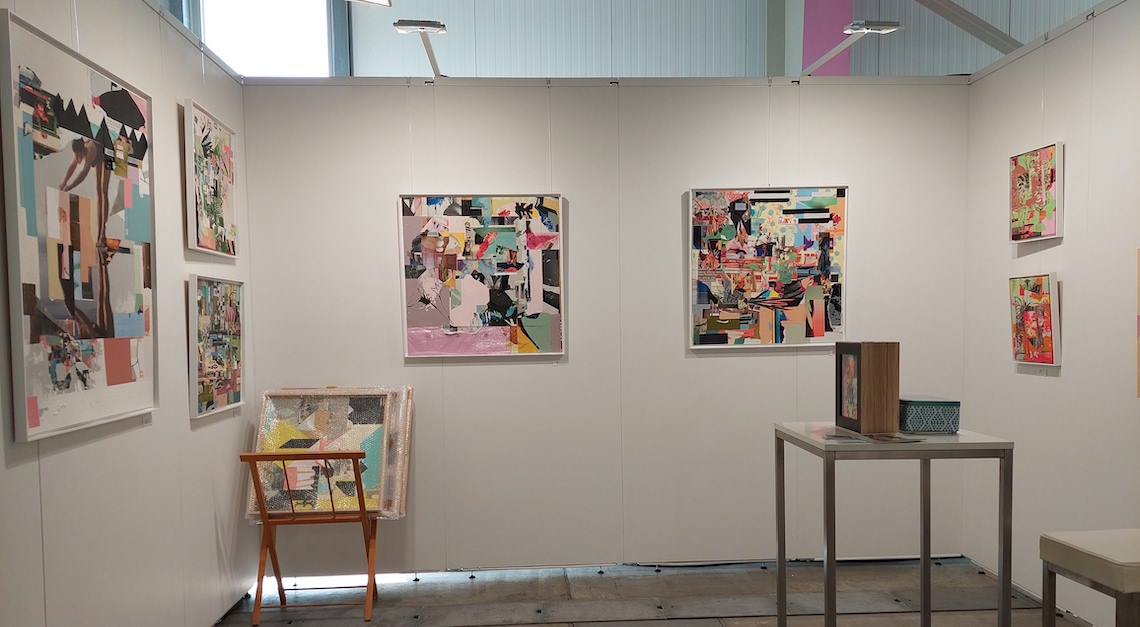 Under the main hall, in the Loft, one artist presentation demands special attention. The space, rather than booth, belonging to the works of Belfast-born Stiofán Grego is an explosion of expressive color and statements, raw emotion and basic shapes. A self-taught artist who discovered his passion for visual creation only several years ago upon moving to Helsinki, Grego draws inspiration from the conundrums of the Northern Irish political circumstances in which he grew up as well as the social situation at large, often featuring bold statements. There is an echo of Basquiat in his works, that he translates to the clothing items also painted in the same manner. Make sure to check out the Loft section and especially Grego’s expressive exhibit. 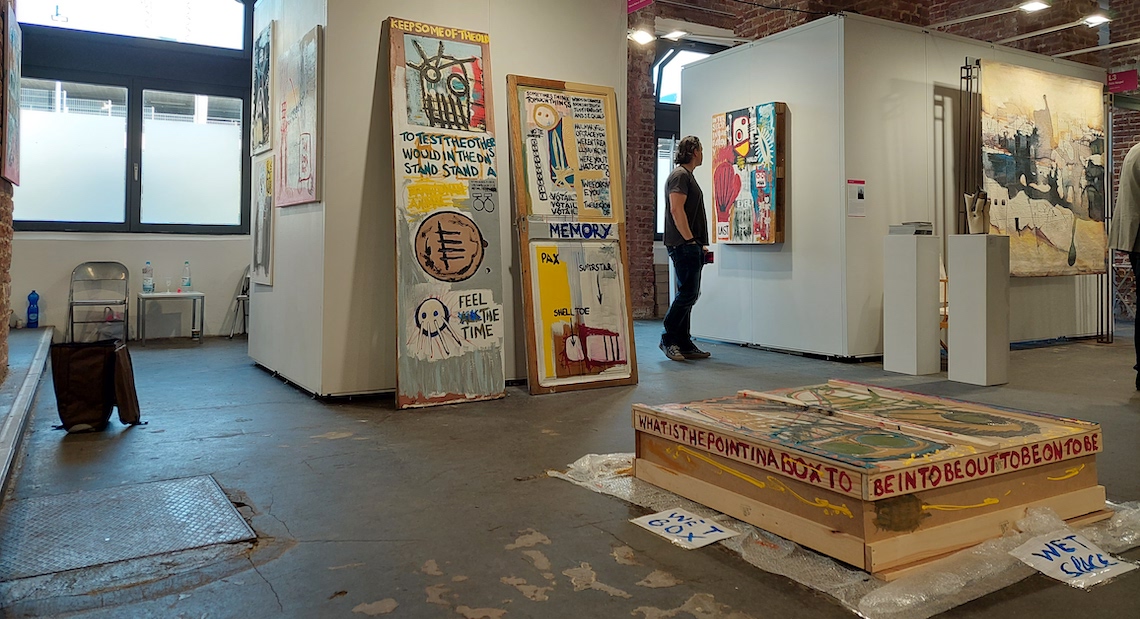 Join us until May 1 at XPOST Cologne!