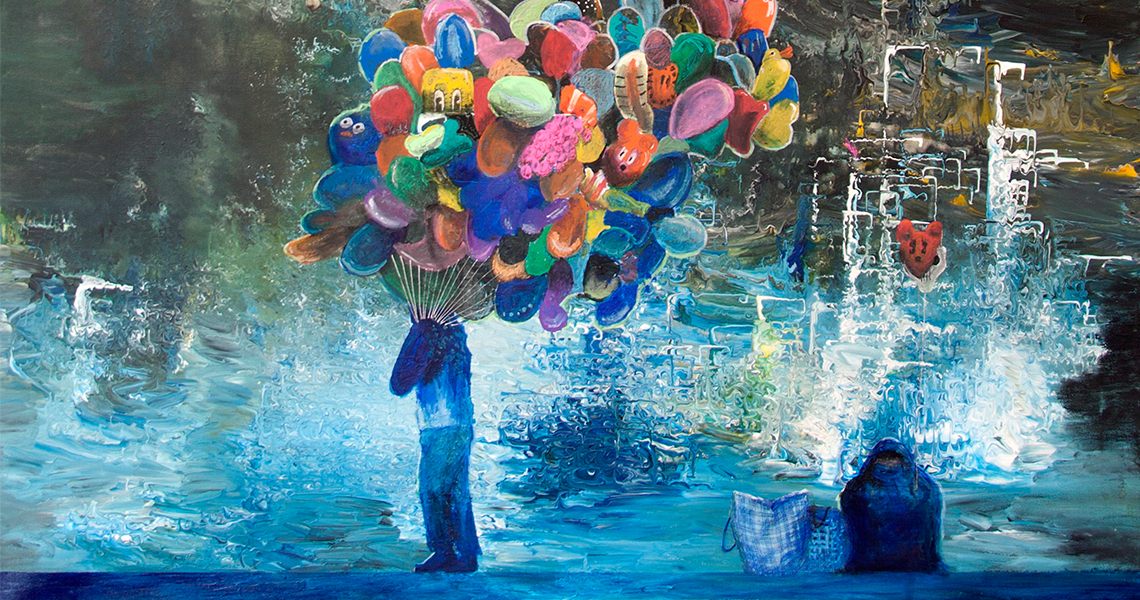 Adgang Forbudt is an artist duo from Denmark who combines the elements of abstract and figurative art with the sketchiness of graffiti. Through their humorous approach, Ida Jas and Jesper Hintze offer a tongue-in-cheek commentary on various social issues, such as homelessness, poverty, and failed utopian ideals. In the interview for upcoming 2016 Berliner Liste, Ida and Jesper reveal that they have already been to Berlin before and that they are looking forward to visiting this vibrant German city again, as the participants of our art fair.

Adgang Forbudt was created founded in 2012 in Denmark, as a joint project of between Ida Jas and Jesper Hintze. What was the original idea behind this project and what was the course of its development from 2012 until now?

Adgang Forbudt: We met each other through a mutual friend, not through any artist gathering. The idea of painting on the same canvas showed up in 2008 and we experimented with it for a while. After the first four paintings were sold at an auction house in Copenhagen, we decided to take our collaboration to a new level. The first step was to invent the name – we agreed upon “Adgang Forbudt”. Also, we were confident that our concept of mixing the abstract (Ida’s part) with the figurative (Jesper’s part) is quite fun and innovative. In the beginning, our work was more of an experiment and our pieces were inspired by cave paintings and simple patterns. It wasn’t until the creation of our artwork Private Area that we decided to shed some light on the topics such as utopian society and homelessness and mix them with contradicting festive items such as balloons. We feel that we have created our own theme and personal universe in this way.

Adgang Forbudt means ‘restricted area’ and most of your art offers a humorous commentary on an exclusionary or tabooed society.How about the visual style of your art, what is the prevalent media you’re working with?

AF: We work with acryllic colors, ink, pen, and sometimes watercolors. In the near future, we will be working with collages and mixed media as well.

You’re going to participate in our 2016 Berliner Liste this September. Have you ever been to Germany before? What are your impressions and ideas about the city of Berlin and its culture and arts?

AF: Berlin is a fantastic city. I like the atmosphere especially in the east side (Jesper), and I have been in Berlin three times so far. I’ve also been to Berlin before (Ida) and what I love about the city is its unique charm – the east meet the west, both architecturally and culturally. We´re really looking forward to the Berliner Liste, it´s our debut there!

Denmark has become quite popular in Europe because of its excellent avant-garde movies, initiated by Dogme 95 project. Besides movies, how about other visual arts in Denmark? Are they equally experimental and avant-garde?

AF: There are many experimental artists, and yes, you’re correct, many of them work in documentary film and video art. Copenhagen has changed a lot over the past 10 years and it has become a very vibrant and culturally rich city.

Finally, what are your expectations and plans when it comes to 2016 Berliner Liste? Are you excited to travel to Berlin and have you already prepared your artworks for exhibition?

AF: We are exicted and we have most of our works prepared for the exhibit. Our expectations are modest – we hope to sell at least one painting and maybe get in touch with some galleries in Berlin. That would be amazing! But just being there, meeting other artists and talking with the visitors will be a meaningful and positive experience.